Women with early-stage breast cancer are increasingly choosing breast-conserving surgery (also called a lumpectomy) to remove tumors. Unlike a mastectomy, which removes the entire breast, a lumpectomy involves taking out only the tumor and a small amount of healthy tissue around it. This procedure allows women to keep their breast and avoid reconstructive surgery. 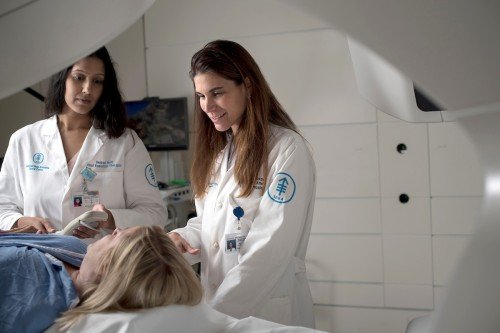 Breast-conserving surgery is usually followed by radiation treatments to destroy any remaining cancer cells in the breast and surrounding lymph nodes. Studies over the past 30 years have shown that a lumpectomy followed by radiation therapy in women with stage I or II breast cancer is likely to be as effective as a mastectomy at preventing the disease from coming back (recurrence).

“Breast-conserving surgery is an individual choice, depending on a person’s personal preferences and comfort level with risk,” says Beryl McCormick, Chief of the External Beam Radiotherapy Service. “Some women with breast cancer — especially if they are diagnosed young — still want a mastectomy, or they even have both breasts removed if they are anxious about the cancer returning. But I think the word is getting out, especially from our surgeons, that the outcome is the same whether or not you have all your breast tissue removed.”

Women who opt for breast-conserving surgery also have a choice about the type of radiation therapy they receive. Once again, studies have shown that, in many people, a less-extensive treatment can work just as well at preventing cancer recurrence.

Partial-Breast Radiation Therapy Is a New Option after Surgery

The standard radiation therapy approach after a lumpectomy has been to target the entire breast. The method is called whole-breast irradiation. It is typically given every day for four to six weeks. In recent years, researchers have investigated whether women with early-stage breast cancer who undergo a lumpectomy could instead receive accelerated partial-breast irradiation (APBI). This involves daily treatment of a smaller part of the breast over a shorter time period, typically one to two weeks.

In December 2019, two large studies published in The Lancet suggested that APBI after a lumpectomy is appropriate for many women with early-stage breast cancer. Dr. McCormick was a co-author on one of the studies, which reported results from a randomized phase III trial comparing whole-breast radiation therapy with APBI in more than 4,000 women with early-stage breast cancer. Although the study showed a slightly higher increase in the cancer returning with APBI, the overall risk was low.

The other Lancet study, reported by researchers in Canada, also showed APBI to be as effective as whole-breast radiation. One interesting finding from that randomized trial, Dr. McCormick explains, is that women who received APBI were slightly more likely to experience cosmetic side effects, such as thickened skin or discoloration.

“At MSK, we’ve found that we can reduce these cosmetic problems with APBI by spreading the typically ten daily treatments over a two-week period,” she says.

Regardless of the radiation therapy approach, Dr. McCormick says most women are happy with their decision to have breast-conserving surgery plus radiation rather than a mastectomy. The radiation treatments are not difficult for most patients. They can go to work and carry out normal activities without visible physical side effects, she notes.

The good news is that both whole-breast and partial-breast radiation therapy after a lumpectomy are effective in preventing early-stage cancers from recurring, according to Dr. McCormick. But partial-breast radiation therapy may not be right for younger women who have not gone through menopause. Breast cancer in these women tends to be more aggressive and less likely to respond to treatments.

“I’m very comfortable offering partial-breast irradiation to older women,” Dr. McCormick says. “It’s a good choice for people who are interested in a short course of radiation and are not as worried about cosmetic issues.”

Even for older women, though, it’s important to look at all the individual factors, she explains. Women should talk to their doctor in order to make the best choice.

— Update: 07-01-2023 — cohaitungchi.com found an additional article Different Annual Recurrence Pattern Between Lumpectomy and Mastectomy: Implication for Breast Cancer Surveillance After Breast-Conserving Surgery from the website www.ncbi.nlm.nih.gov for the keyword breast cancer recurrence after lumpectomy and radiation.

Breast cancer-related death is usually a result of disease recurrence, which occurs even in early breast cancer patients with small tumors and a negative lymph node status after long-term follow-up [1, 2]. Previous studies indicated that 70% of recurrences occur ≤3 years postsurgery, and the recurrence risk reaches a peak at 1–2 years after surgery [3, 4]. In 1997, the American Society of Clinical Oncology (ASCO) published breast cancer surveillance guidelines for the first time [5], in which the expert panel recommended that all women have a careful history and physical examination every 3–6 months for the first 3 years after primary therapy, then every 6–12 months for the next 2 years, then annually. The rationale for such an approach is that, because 60%–80% of all breast cancer recurrences are detected ≤3 years postsurgery, scheduling of surveillance visits should be more frequent during that time period [5]. Of note, the recurrence data that the guidelines were based on were derived from early clinical studies in which most patients underwent mastectomy rather than well-performed breast-conserving surgery (BCS). ASCO subsequently updated these guidelines several times, but the above-mentioned schedule of surveillance visits never changed despite the fact that the target population could have received either mastectomy or lumpectomy [6, 7].

Thus far, there are few prospective trials investigating whether or not early detection of breast cancer recurrence results in a better outcome. It seems that surveillance aimed at early detection of “distant metastases” does not improve survival [16]; however, the effect on survival of early detection of “breast recurrences” is debatable [17–19]. Greater monitoring of the breast after BCS would identify more signs of early recurrence, whereas early detection of second breast cancers (either IBTR or contralateral breast cancer [CBC]) in the asymptomatic phase could improve relative survival by 27%–47%, as Houssami et al. [18] suggested. Perrone et al. [20] also reported that early detection of local recurrence might have a favorable impact on the prognosis of patients followed after primary treatment for breast cancer because a difference in survival was recorded in favor of cases detected in the asymptomatic state (p < .001). Another meta-analysis [17] found that recurrences assessed in patients without symptoms were related to a higher probability of survival than when symptoms were present (hazard ratio [HR], 1.56; 95% confidence interval [CI], 1.36–1.79). The authors thus concluded that detection of isolated locoregional or CBC recurrences in patients without symptoms has a beneficial impact on the survival of breast cancer patients, when compared with late symptomatic detection. Besides the potential benefits in terms of survival, a few patients who refuse salvage mastectomy at locoregional relapse after BCS could be treated with a second lumpectomy, albeit the treatment choice for locoregional relapse historically has been salvage mastectomy [3]. We believe that early detection of breast cancer allows for a higher proportion of reconservation. Of course, the safety and effectiveness of reconservation should be further evaluated.

In most studies, the risk for recurrence is generally described by survival curves rather than annual hazard rates. In recent years, some investigators have scrutinized patterns of recurrence and the annual recurrence rate (ARR) is used to assess dynamic changes in recurrence risk by year. Thus far, we have little information on the difference in the recurrence pattern between lumpectomy and mastectomy patients. The aim of the present study was to show the differential recurrence pattern between these two surgical modalities using our single-institution data, as well as to review relevant literature-based data to confirm our observations. A better understanding of the recurrence pattern with each type of surgery would be helpful in clinical surveillance and monitoring.