POPCORN IS LIKELY your go-to snack while you’re binge-watching Netflix, sitting in a dark cinema, or enjoying a night at the ballpark. As you’re popping kernels into your mouth, you may be wondering, “Is popcorn healthy?”

The answer is mostly yes, but it depends on how you’re eating it, dietitians say.

“I definitely consider popcorn a healthy snack,” says Maryann Walsh, R.D., president of Walsh Nutrition Consulting. “Not only is it a high-volume food that can help us feel full and satisfied, but it’s also typically easily available and affordable. It’s versatile when it comes to toppings and flavors that you can add to it.”

There are many different ways to make popcorn. Elements like the amount and type of oil used, such as unsaturated canola oil versus saturated coconut oil, as well as added salt or other flavors and ingredients affect the health content, she says. Cooking method matters, too.

Air-popped popcorn made at home with no oil is much healthier than the big tubs of popcorn that you get at the movies. Popcorn made at movie theaters may be popped with saturated fat, and you may be tempted to add butter and seasoned salts, which increases the fat and sodium content. And, microwave popcorn might contain added, salt, and other ingredients that add calories and affect its overall health.

Still, most popcorn offers several health benefits. It’s loaded with nutrients and antioxidants, and snacking on it can help you increase your fiber and whole grain intake. Here’s a look at why popcorn is healthy and tips for keeping the snack guilt-free.

If popcorn is your guilty pleasure, you’ll be excited to know that it is healthy, unlike other snacks that are loaded up with sugar and salt. Here’s an overview of popcorn’s health benefits:

Popcorn is a whole grain, and Walsh says eating whole grains is linked to a lower incidence of heart disease and diabetes.

The Dietary Guidelines for Americans recommends that at least half of your grain intake be whole grains, which means you need about 48 grams of whole grains a day. Snacking on popcorn every day has been shown to increase overall whole grain intake, according to the Journal of the American Academy of Nutrition and Dietetics.

As a whole grain, popcorn is a good source of fiber. According to the American Heart Association, popcorn contains more fiber per serving than whole wheat bread. A 3-cup serving of popcorn contains 3 to 4 grams of fiber, Walsh says. It’s recommended that men get 30 to 38 grams of fiber a day, while women need 21 to 25 grams. Fiber helps control blood sugar and cholesterol, regulates bowel movements, and helps with weight management, according to Mayo Clinic.

It makes you feel full.

The airiness of popcorn makes it a high-volume food, and Walsh says that keeps you feeling full. One cup of plain air-popped popcorn—without butter, salt, or other toppings—contains about 30 calories, according to the U.S. Department of Agriculture. So, three whole cups is just under 100 calories.

Popcorn contains polyphenols, which are a type of antioxidant found in plants, Walsh says. Polyphenols have been shown to combat UV damage and lower the risk of developing some cancers, cardiovascular disease, diabetes, and other diseases. Research shows that polyphenols are more concentrated in popcorn compared to sweet corn or other vegetables.

Popcorn is loaded with vitamins and minerals, according to the USDA.

Air-popped popcorn doesn’t use oil and is the healthiest way to enjoy the snack, according to Cleveland Clinic. Popping it on the stovetop using oil can be a way to add healthy fats to your diet, just opt for walnut, avocado, canola, or extra virgin olive oil. It’s also best to skip the butter, which adds saturated fat—or, if you must have butter, go for about 2 to 3 tablespoons.

If you want to add flavoring to the popcorn you make at home, Cleveland Clinic recommends using hot sauce, balsamic vinegar, herbs and spices, peanut butter, or a bit of shredded cheese.

“The healthiest way to eat popcorn is typically air-popped with no oil or butter and minimal salt added,” Walsh says. “However, there are numerous bagged popcorn products that come pretty close to matching the nutritional facts of air-popped popcorn such as SkinnyPop or BoomChickaPop.”

Just check the nutrition label and remember that 3 cups of air-popped plain popcorn contains about 100 calories and no sodium or fat (unless you add it).

Microwave popcorn often contains high amounts of salt and flavorings, and may contain chemicals, which can add calories and make it a less-healthy option. “Make sure to take a look at the nutrition facts label and serving sizes when consuming a packaged popcorn product,” Walsh says.

Movie theater popcorn can contain 400 to 1,200 calories, depending on the size and toppings. Some cinema chains use coconut oil or other saturated fats, which increases the calorie count. The popcorn is also usually loaded up with salt, with some having as much as 1,500 milligrams of sodium, almost a full day’s worth. The USDA recommends adults limit salt to 2,300 milligrams a day.

Can you eat too much popcorn?

Technically, you can eat too much of anything. But, eating too much popcorn is difficult, Walsh says. Its fluffiness makes it a high-volume food, so you’ll likely get your fill after a cup or two. Unless it’s dripping in butter and salt, a few servings isn’t all that bad for your health.

“The downsides of eating popcorn are if you add toppings, you need to factor those into the total calories you’re consuming, and calories from toppings like butter or flavored oils can add up fast,” Walsh says. “And, if you need to watch sodium intake, then you’ll want to be careful with how much salt you add to your popcorn.”

However, keep in mind that popcorn is a carbohydrate, she says. People with diabetes or others who need to watch their carb intake should be conscious of their popcorn serving sizes.

— Update: 03-01-2023 — cohaitungchi.com found an additional article Is Microwave Popcorn Bad for You? 5 Reasons to Avoid It from the website healyeatsreal.com for the keyword is popcorn good for diet.

Is microwave popcorn bad for you? If your health is important to you, you may want to think twice before consuming it regularly; Below are a few reasons why. 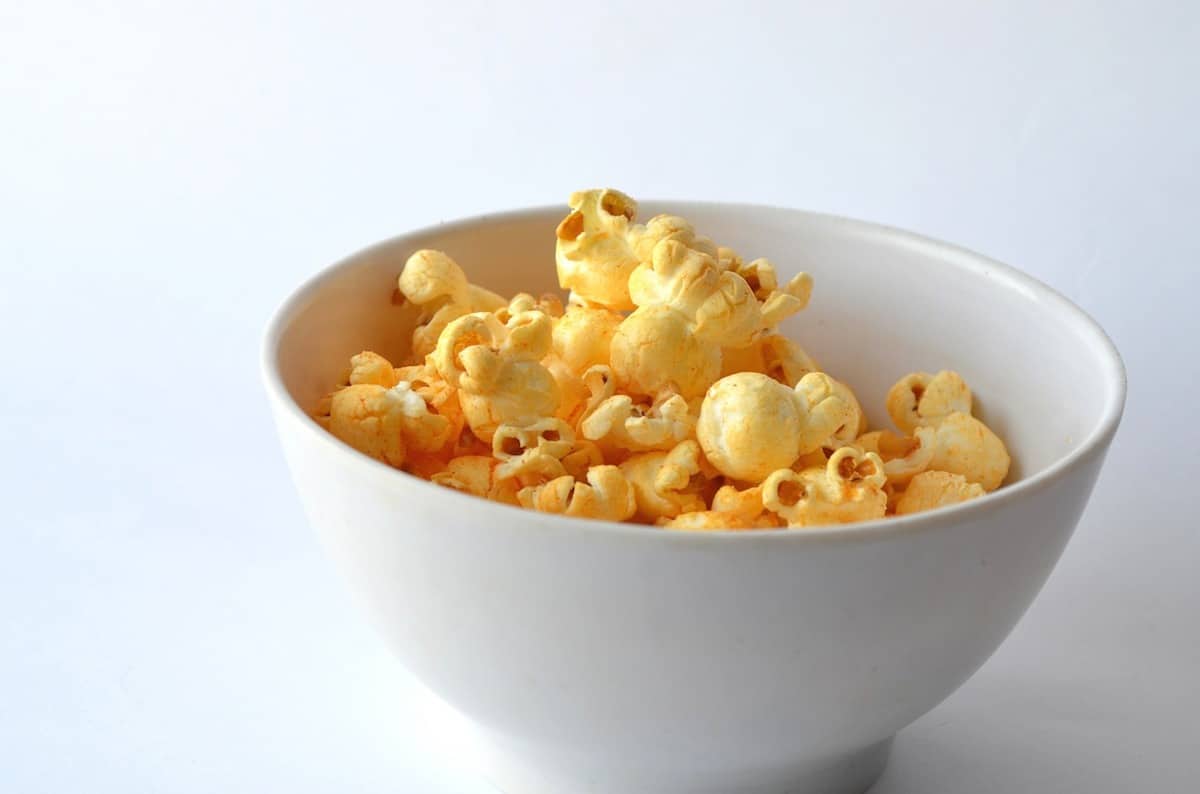 Most people enjoy a nice bowl of popcorn when sitting down for a movie, but when you know how some of the ingredients might affect you, you may want to avoid it. Don’t worry though, there are healthier ways to enjoy popcorn!

Unfortunately, this disease is irreversible and can cause lung inflammation, scarring and even restricted airflow resulting in breathing trouble. In extreme cases it can become life-threatening.

According to the Centers for Disease Control, at least 8 factory workers in Missouri, who worked in popcorn factories developed this lung disease. Reports of popcorn lung from additional factories were revealed later. 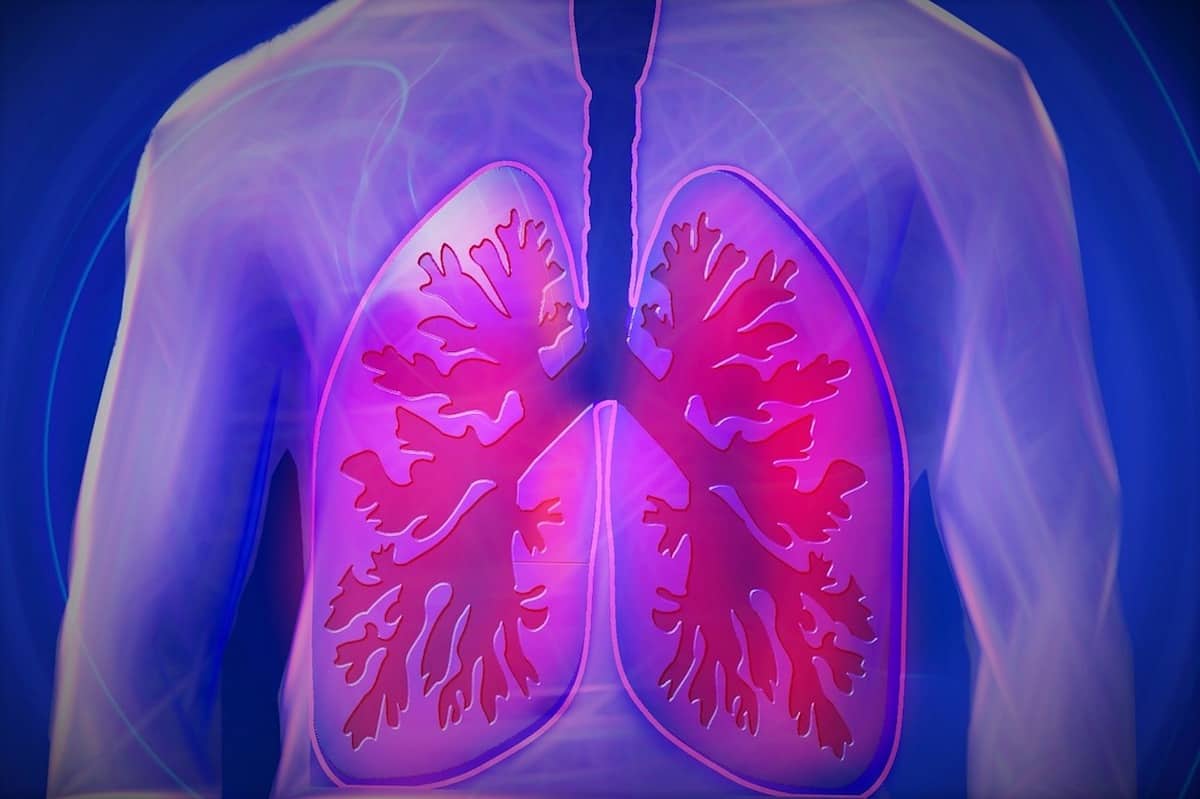 Most popcorn brands use an artificial butter flavoring in their microwave popcorn called diacetyl.

Certain studies found severe lung and respiratory issues connected to diacetyl, so much so that The Occupational Safety and Health Administration now recommends controlling exposure to protect factory workers who work around diacetyl.

However, factory workers are not the only ones at risk for bronchiolitis obliterans (popcorn lung). When a bag of microwave popcorn is heated, this causes the chemical diacetyl to vaporize, thus allowing consumers to breath in the chemical.

Dr. Cecile Rose, a leading lung expert concluded that microwave popcorn was the reason for her patient’s lung disease. 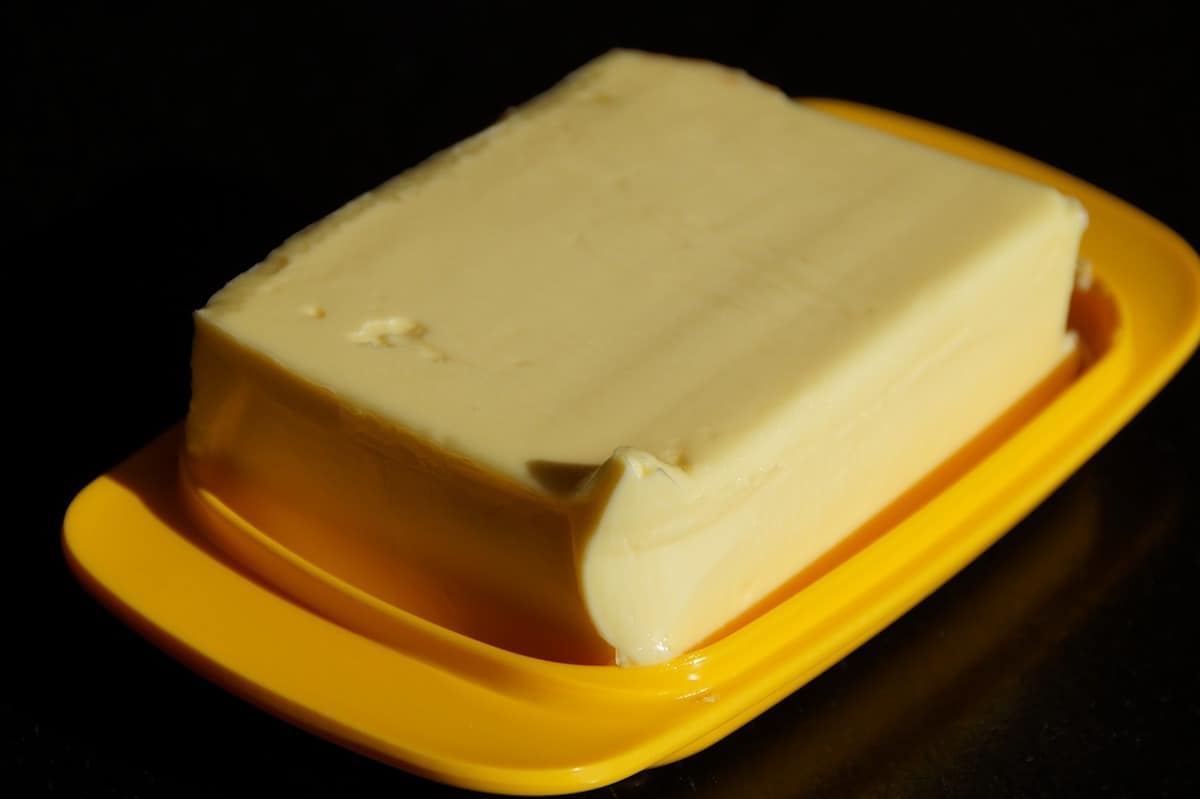 3. Perfluorinated Compounds (PFCs) in The Bag

One of the worst things about microwave popcorn are the chemicals in the bag that it comes in.

The main offenders are perfluorinated compounds (PFCs) which are added to the inside of the microwave popcorn bag to keep grease from seeping through. PFCs break down into perfluorooctanoic acid (PFOC), a known carcinogen and has been linked to cancer according a 2017 United States Environmental Protection Agency report. 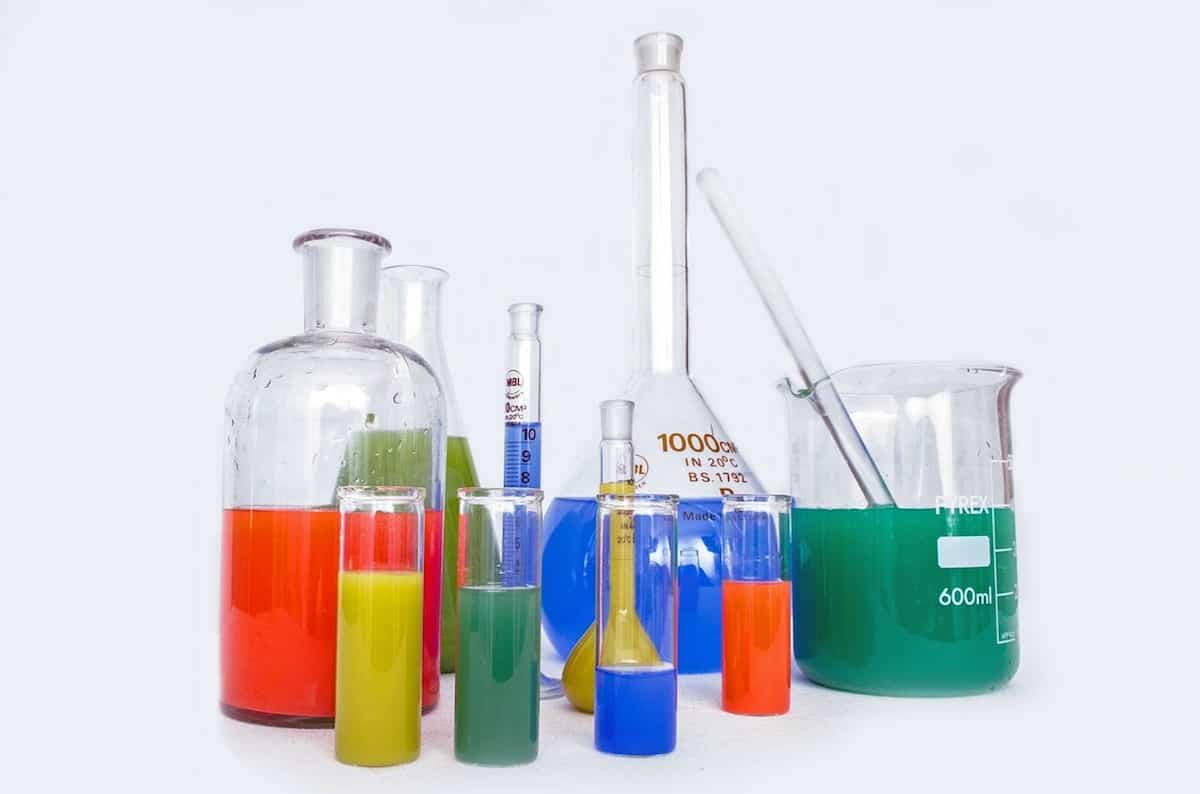 Many brands of microwave popcorn use preservatives that are linked to certain health issues.

One commonly used preservative in microwave popcorn is TBHQ (tert-butylhydroquinone) to prevent food from going rancid to extend the shelf life. TBHQ is often used with butylated hydroxyanisole (BHA) and has a very similar chemical makeup.

Although no general consensus has been made on whether these compounds are completely safe or not, there have been some studies showing the potential risks of these additives.

According the the National Library of Medicine there are possible links to vision, lung and behavioral effects from TBHQ.

Many microwave popcorn brands have hydrogenated oils which are a type of trans fat that are dangerous for your health… especially your heart and cholesterol.

Apart from that, even if the popcorn doesn’t have hydrogenated oil, it is likely to have soybean oil or canola oil in it, which is believed to contribute to inflammation and a host of other issues. Learn more about why these oils should be avoided here. 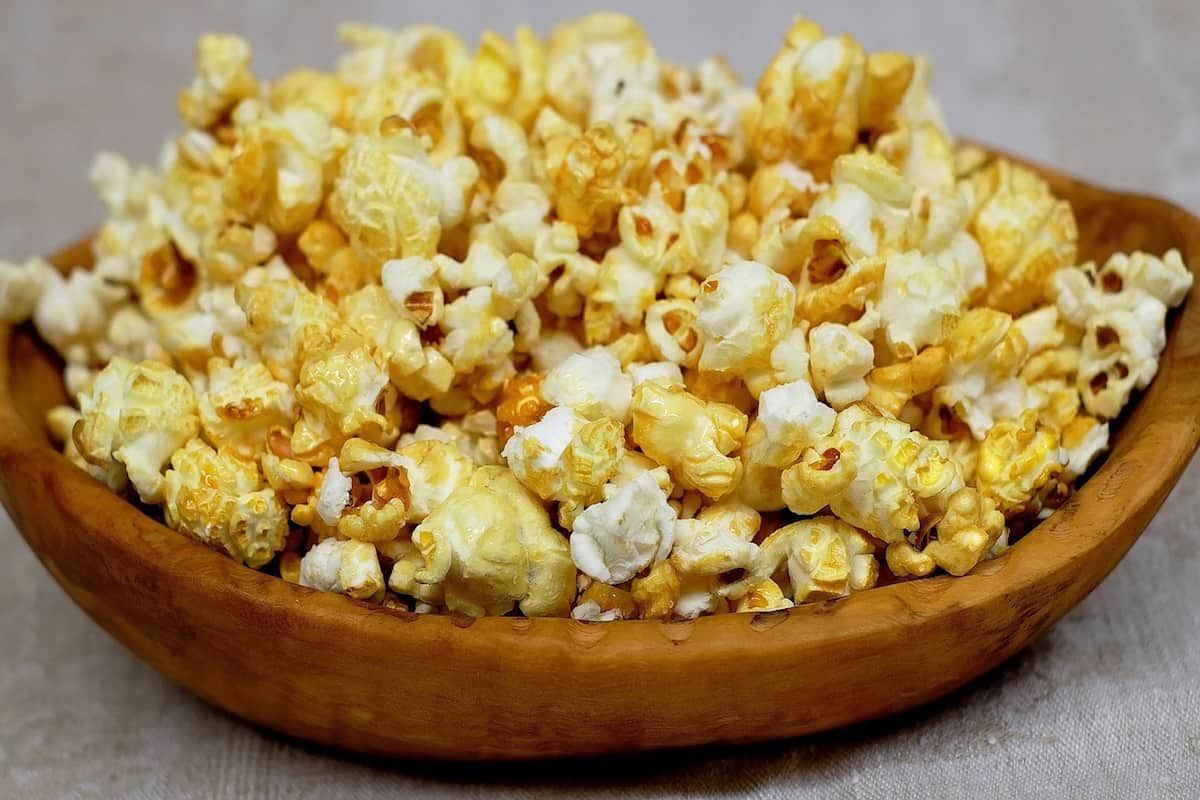 Can you get microwave popcorn without chemicals?

Although there are a few brands of microwave popcorn that advertise that they’re free from PFOA liners in the bag, unfortunately with most store-bought shelf-stable microwave popcorn, you need some type of lining on the bag to keep the oil from seeping through.

So even though many companies avoid PFOA liners, they replace it with another kind of liner that may be just as bad for your health, but isn’t as well researched yet.

Luckily, there are several simple and easy alternatives to popcorn without having to get the microwavable kind. 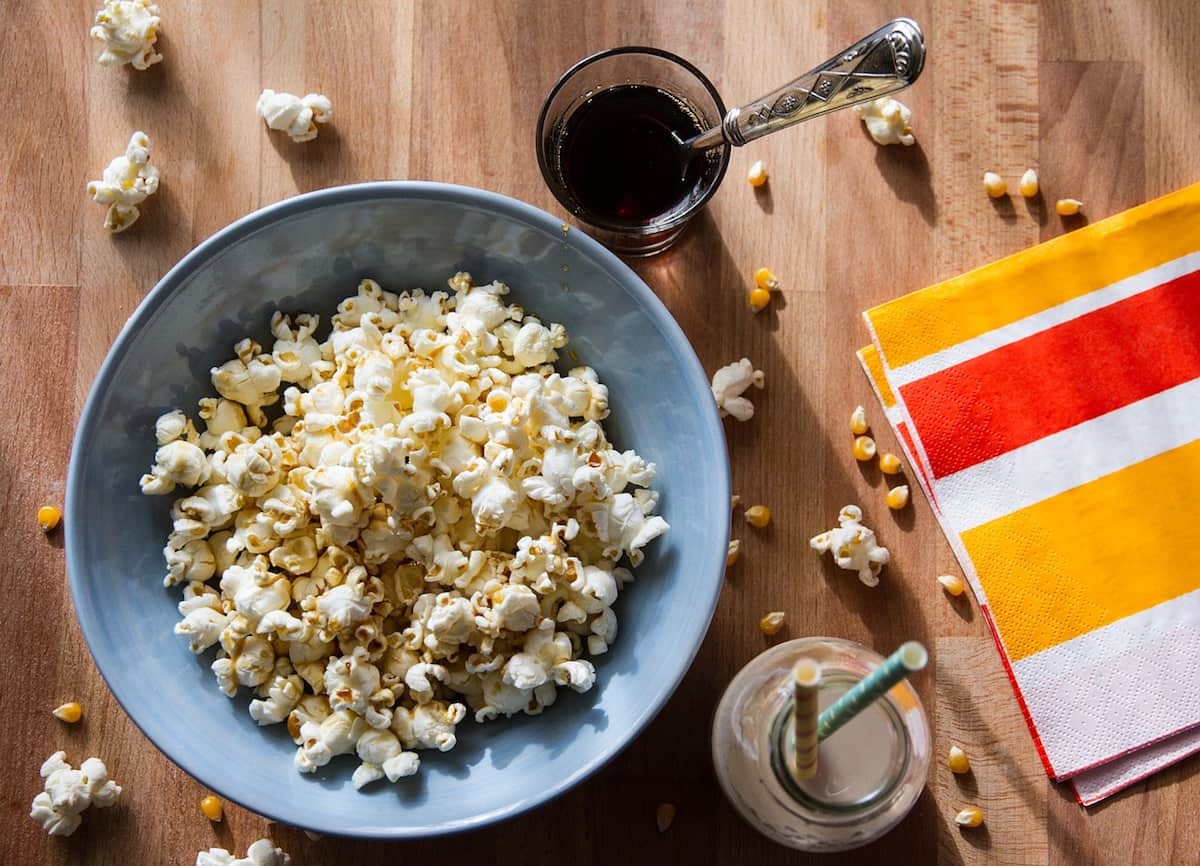 What kind of popcorn is the healthiest?

There are a few different easy ways to make healthy popcorn so you can avoid the microwavable packaged kind….

How to make stovetop popcorn in 5 minutes

For this size of popcorn you’ll need a medium sized pot (around 5 quart size) with a fitting lid to leave enough room for the popcorn. Start by putting about 1-2 tablespoons of refined coconut oil, ghee or avocado oil in the pot. Melt it over medium to medium-high heat. 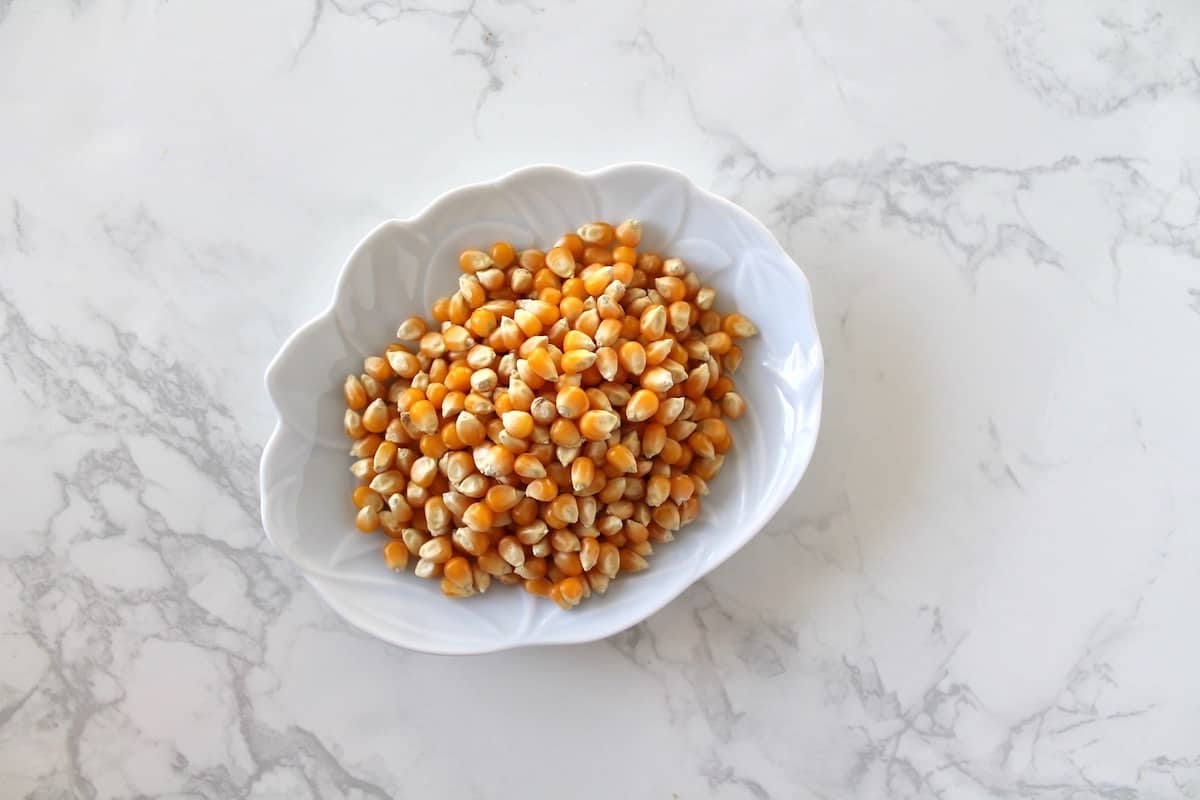 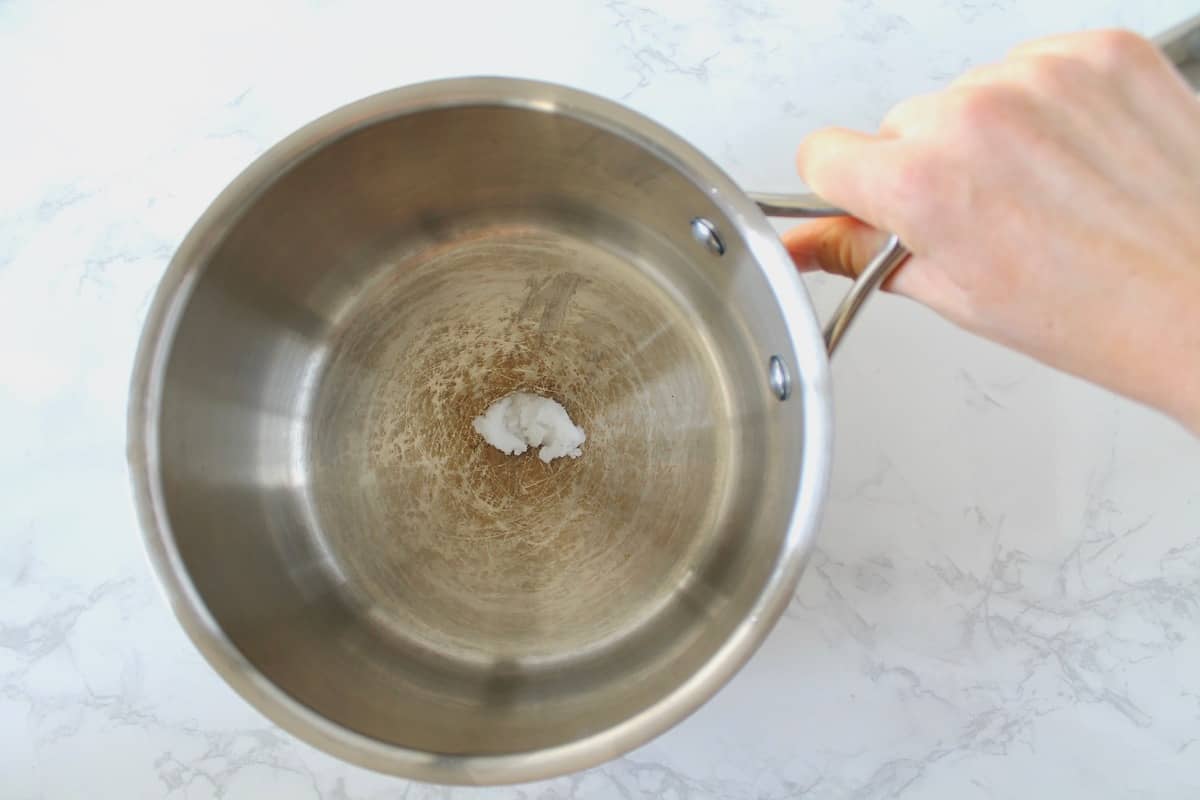 Add 1/4 cup of popcorn kernels to the pot, stir the kernels around a little bit to cover them with the oil and cover the pot with the lid. 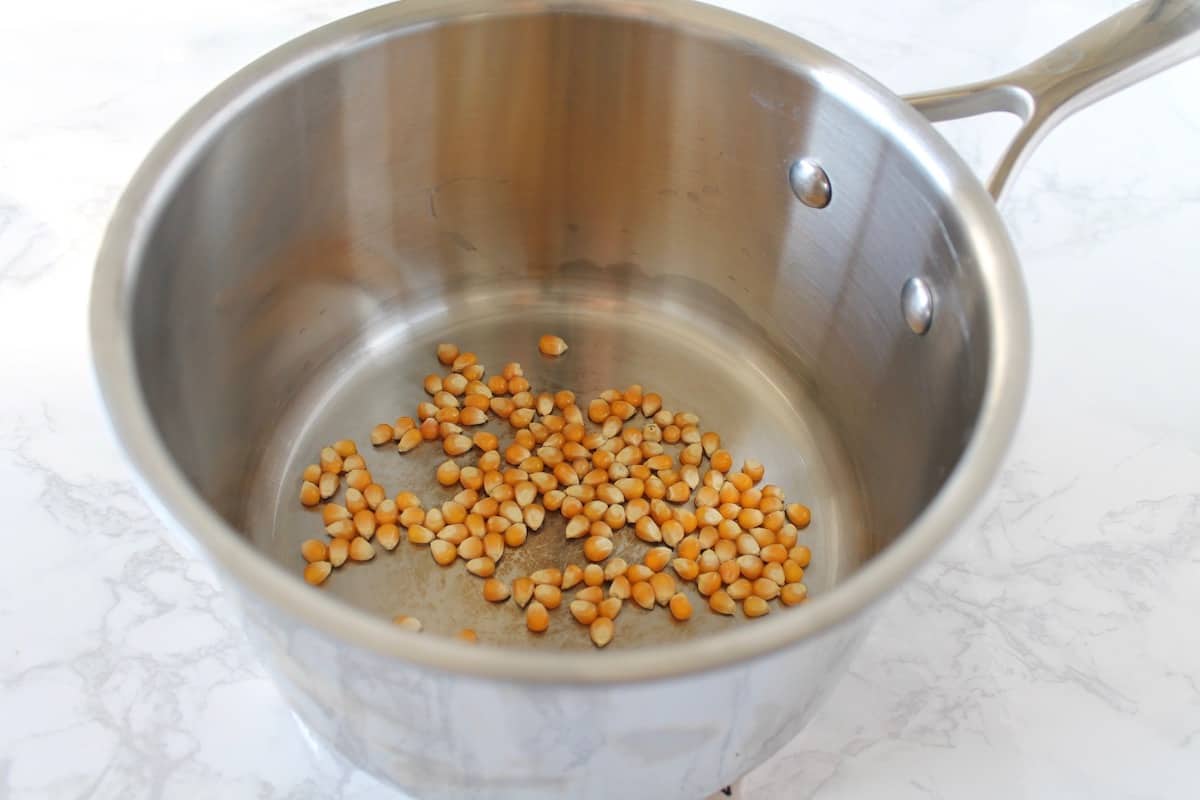 It will take a couple minutes for it to heat up and start popping the kernels. Once they start popping you’ll hear it. Holding the lid firmly on the pot rock the pot back and forth to help bring any unpopped kernels to the bottom of the pot. Once the popping begins to subside and the time between popping sounds begins to get longer, turn off the heat and let sit for about 15 seconds to wait for any straggling popping kernels. 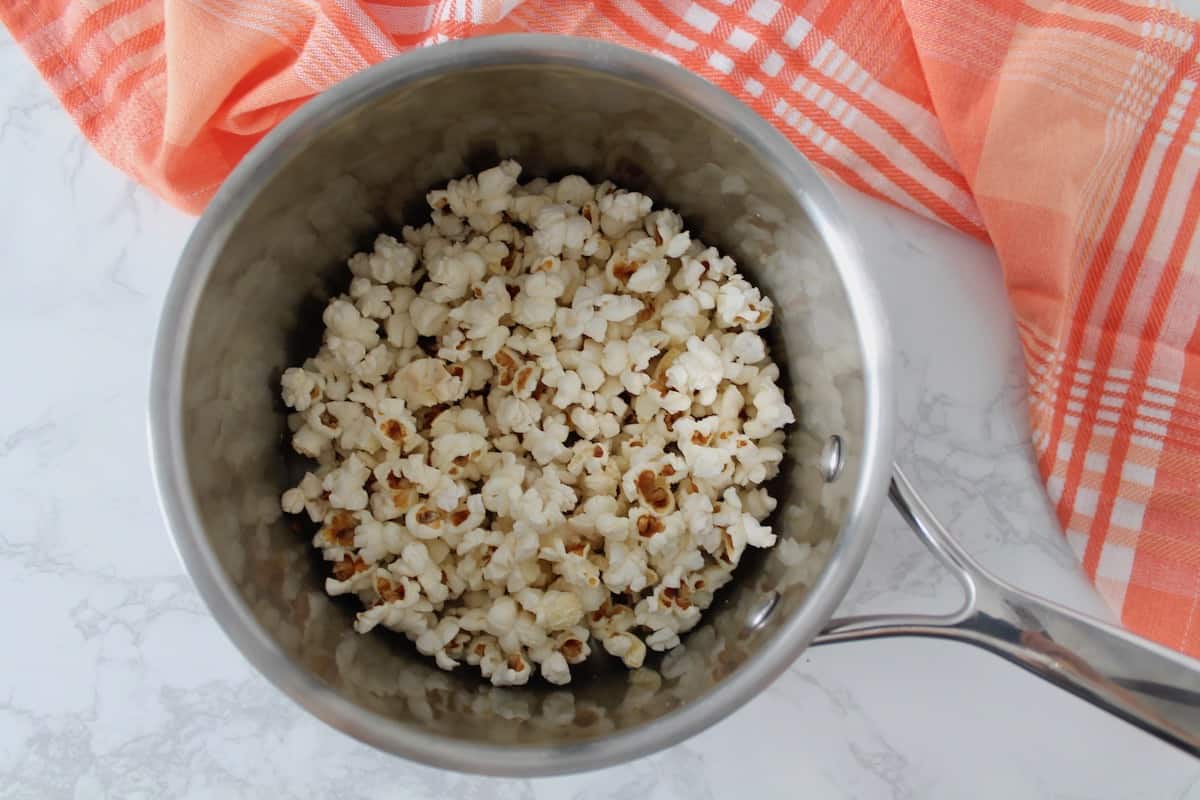 Remove from the heat and remove the lid. At this point you can add more oil if you want or leave it as is. Melted ghee is a great choice because it’s healthy and tastes just like movie theater butter. If you add it drizzle it over the popcorn in the pot, then quickly return the lid and shake it to evenly distribute, then add sea salt over it and shake again to distribute. 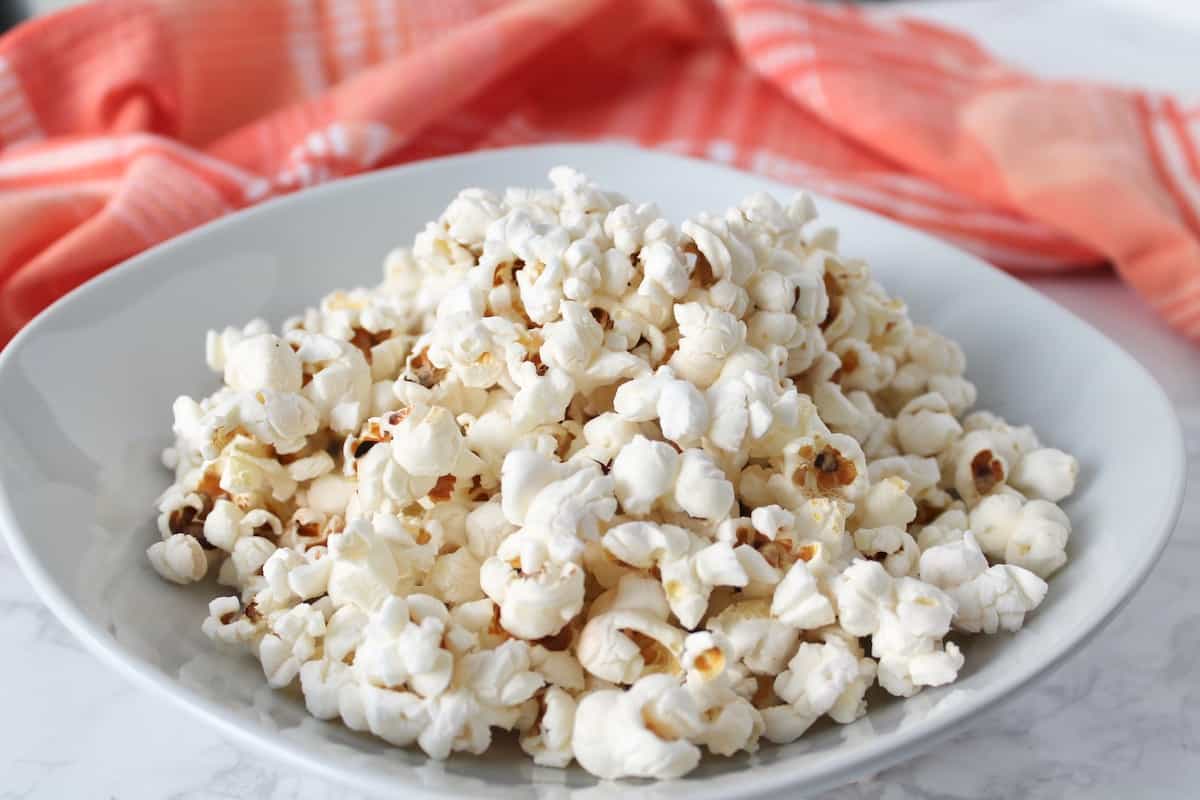 Pour your finished popcorn into a bowl and enjoy!

This article was originally posted in December of 2013, but has been republished in February of 2019 to include updated sources and images. 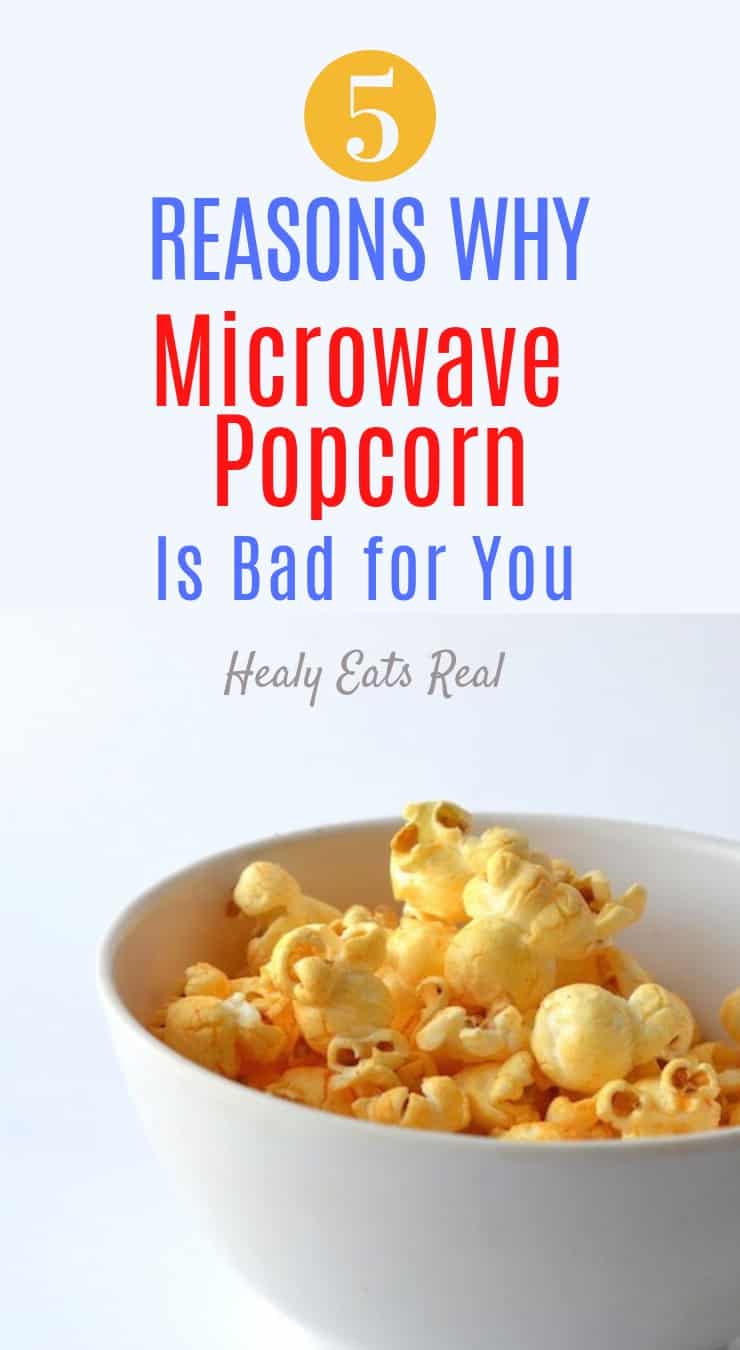